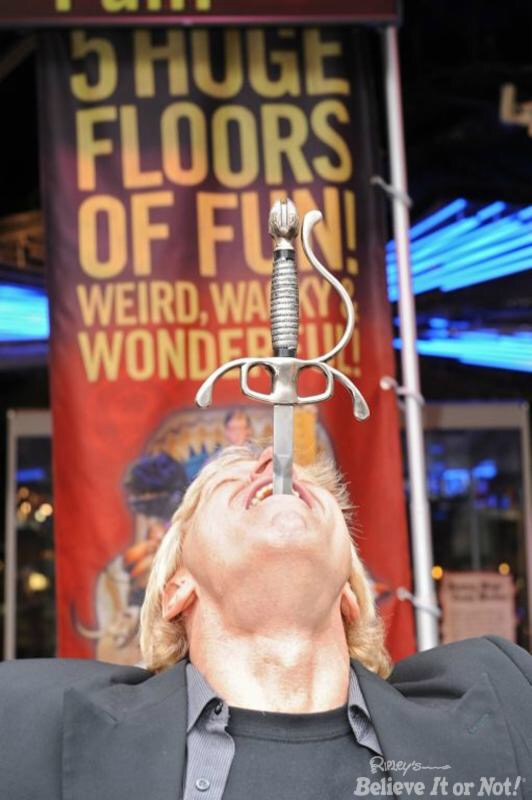 Ripley’s Believe It or Not! will once again pay tribute to the ancient art of sword swallowing by holding free sword swallowing performances as part of World Sword Swallower’s Day on Saturday, February 28.

-Dan Meyer, World Sword Swallower’s Day founder and America’s Got Talent finalist, will attempt several death-defying feats. Meyer has swallowed as many as 21 swords – at one time
-Franz Huber, who is coming all the way from Germany to participate
-Haley Hall, who at just 16 years old may be the youngest sword swallower in the world!

The show will start at 1:30 pm with an official swallow at 2:28:15 to coincide with the 2/28/15 date. Ripley’s Orlando Odditorium is located at 8201 International Drive. The sword swallowing performances will be FREE, but admission is required to tour the Odditorium.

This will be the 8th annual World Sword Swallower’s Day celebration, founded by the Sword Swallowers Association International (SSAI) and co-sponsored by Ripley’s Believe It or Not!

“We established World Sword Swallower’s Day to recognize the handful of people in the world who can do this and honor this art that is more than 4,000 years old,” said Dan Meyer, president of the SSAI.

The event also raises awareness of the contributions sword swallowers have made to the fields of medicine and science and raises money for esophageal cancer research.

People who want to try their hand at sword swallowing – and not risk their lives – can use the Ripley iSword app to swallow a virtual sword and freak out their friends. All it takes is nerves of steel and lightning-fast reflexes. The app is available at the App Store for iPhone, iPad or iPod touch iOS 5 or later.